Wireshark (known as Ethereal until a trademark dispute in Summer 2006) is a fantastic open source multi-platform network protocol analyzer. It allows you to examine data from a live network or from a capture file on disk. You can interactively browse the capture data, delving down into just the level of packet detail you need. Wireshark has several powerful features, including a rich display filter language and the ability to view the reconstructed stream of a TCP session. It also supports hundreds of protocols and media types. A tcpdump-like console version named tshark is included. One word of caution is that Wireshark has suffered from dozens of remotely exploitable security holes, so stay up-to-date and be wary of running it on untrusted or hostile networks (such as security conferences).

Other wireless site survey tools require significant existing infrastructure, or extensive investment of time for walk-abouts with a scaled floor-plan. Information Systems Auditors and Information Security personnel often don't have access to all required physically-controlled space. In addition, installed Wireless Access Points (WAPs) with site survey capabilities typically do not cover all of the space -- if they are installed at all. My Wireless Triangulator Site Survey Tool provides a better option to locate rogue wireless access points.

Note:
Some objects in a typical office space may reflect or absorb wireless radio signals. As a result, you should take as many readings as possible with this tool to determine the approximate location of potentially rogue wireless access points.

Aircrack is a suite of tools for 802.11a/b/g WEP and WPA cracking. It implements the best known cracking algorithms to recover wireless keys once enough encrypted packets have been gathered. . The suite comprises over a dozen discrete tools, including airodump (an 802.11 packet capture program), aireplay (an 802.11 packet injection program), aircrack (static WEP and WPA-PSK cracking), and airdecap (decrypts WEP/WPA capture files).

IRS scans for IP restrictions set for a particular service on a Host. It combines "ARP Poisoning" and 'Half-Scan' techniques and tries totally spoofed TCP connections to the selected port of the Target. IRS is not a port Scanner but a 'valid source IP address' Scanner for a given service.

sTerm is a Telnet client with a unique feature. It can establish an entire bi-directional Telnet session to a target host never sending your real IP and MAC addresses in any packet. By using "ARP Poisoning", "MAC Spoofing" and "IP Spoofing" techniques sTerm can effectively bypass ACLs, Firewall rules and IP restrictions on servers and network devices. the connection will be done impersonating a Trusted Host.

ArpWorks is an utility for sending customized 'ARP announce' packets over the network. All ARP parameters, including the Ethernet Source MAC address (the phisical address of your network card) can be changed as you like. Other features are: IP to MAC resolver, subnet MAC discovery, host isolation, packets redirection, general IP confict.

CredDump is an utility that dumps passwords from Windows XP/2003 user's credential files and shows them in they're cleartext form.

All of which can be found here:

An arsenal of about 350 hacking/reverse-engineering tools in one distro, for free.

BackTrack is a Linux-based penetration testing arsenal that aids security professionals in the ability to perform assessments in a purely native environment dedicated to hacking. Regardless if you’re making BackTrack you Install BackTrack, boot it from a Live DVD or thumbdrive, the penetration distribution has been customized down to every package, kernel configuration, script and patch solely for the purpose of the penetration tester. 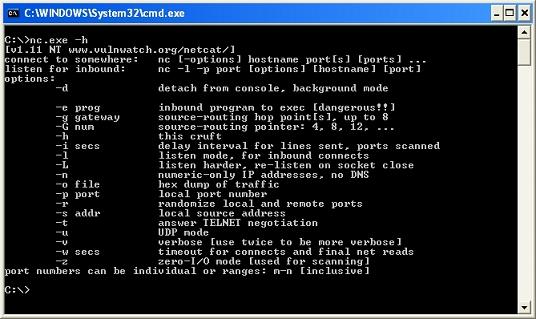 This simple utility reads and writes data across TCP or UDP network connections. It is designed to be a reliable back-end tool to use directly or easily drive by other programs and scripts. At the same time, it is a feature-rich network debugging and exploration tool, since it can create almost any kind of connection you would need, including port binding to accept incoming connections.

The original Netcat was released by Hobbit in 1995, but it hasn't been maintained despite its popularity. It can sometimes even be hard to find a copy of the v1.10 source code. The flexibility and usefulness of this tool prompted the Nmap Project to produce Ncat, a modern reimplementation which supports SSL, IPv6, SOCKS and http proxies, connection brokering, and more. Other takes on this classic tool include the amazingly versatile Socat, OpenBSD's nc, Cryptcat, Netcat6, pnetcat, SBD, and so-called GNU Netcat.

Kismet is a console (ncurses) based 802.11 layer-2 wireless network detector, sniffer, and intrusion detection system. It identifies networks by passively sniffing (as opposed to more active tools such as NetStumbler), and can even decloak hidden (non-beaconing) networks if they are in use. It can automatically detect network IP blocks by sniffing TCP, UDP, ARP, and DHCP packets, log traffic in Wireshark/tcpdump compatible format, and even plot detected networks and estimated ranges on downloaded maps. As you might expect, this tool is commonly used for wardriving. Oh, and also warwalking, warflying, and warskating, etc.

Nikto is an Open Source (GPL) web server scanner which performs comprehensive tests against web servers for multiple items, including over 6400 potentially dangerous files/CGIs, checks for outdated versions of over 1200 servers, and version specific problems on over 270 servers. It also checks for server configuration items such as the presence of multiple index files, HTTP server options, and will attempt to identify installed web servers and software. Scan items and plugins are frequently updated and can be automatically updated. 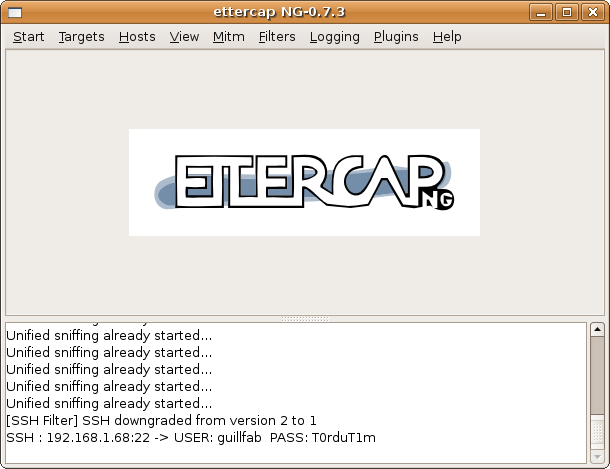 Ettercap is a suite for man in the middle attacks on LAN. It features sniffing of live connections, content filtering on the fly and many other interesting tricks. It supports active and passive dissection of many protocols (even ciphered ones) and includes many feature for network and host analysis. 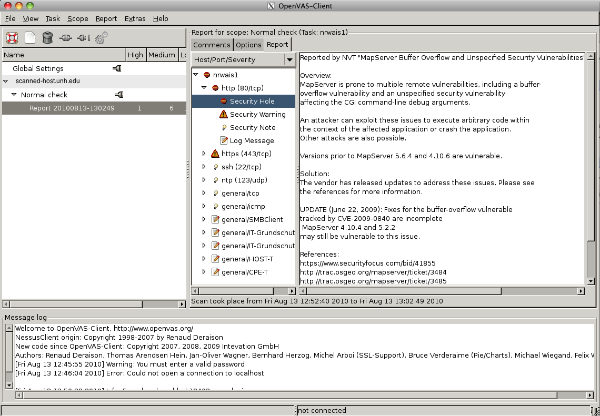 The world's most advanced Open Source vulnerability scanner and manager

OpenVAS is a vulnerability scanner that was forked from the last free version of Nessus after Nessus went proprietary in 2005. It continues to grow, with more than 23,000 tests as of November 2011. OpenVAS plugins are written in the same NASL language used by Nessus.

Scapy is a powerful interactive packet manipulation tool, packet generator, network scanner, network discovery tool, and packet sniffer. Note that Scapy is a very low-level tool—you interact with it using the Python programming language. It provides classes to interactively create packets or sets of packets, manipulate them, send them over the wire, sniff other packets from the wire, match answers and replies, and more.

When you need to brute force crack a remote authentication service, Hydra is often the tool of choice. It can perform rapid dictionary attacks against more then 30 protocols, including telnet, ftp, http, https, smb, several databases, and much more. Like THC Amap this release is from the fine folks at THC.

Netstumbler is the best known Windows tool for finding open wireless access points ("wardriving"). They also distribute a WinCE version for PDAs and such named MiniStumbler. The tool is currently free but Windows-only and no source code is provided. It uses a more active approach to finding WAPs than passive sniffers such as Kismet or KisMAC.

Ophcrack is a free rainbow-table based cracker for Windows passwords (though the tool itself runs on Linux, Windows, and Mac). Features include LM and NTLM hash cracking, a GUI, the ability to load hashes from encrypted SAM recovered from a Windows partition, and a Live CD version. Some tables are provided as a free download but larger ones have to be bought from Objectif Sécurité.

Code:
** WIll add some more soon

Among them i know only this Cain and Abel and Ophcrack,as i have tried for cracking computer that forgot its login password.
Share more:

WinPWD Windows Password Recovery is one of the most effective tools to reset password for Windows 10, Windows 7 and Windows 8. The locked computer can be unlocked in less than 1 minutes!
www.winpwd.com
Hash Suite - a program to audit security of password hashes