Windows Update will try to schedule update installations at specific times of day when doing so results in lower carbon emissions. Most electrical grids are powered by multiple sources, including renewables and fossil fuels. Whenever possible, Windows 11 will now prioritize installing updates in the background at times when greater amounts of clean energy sources (like wind, solar, and hydro) are available. Users can always choose to install updates immediately by navigating to Settings > Windows Update and choosing “Check for Updates”. This feature will only be enabled when your PC is plugged-in and regional carbon intensity data is available from our partners electricityMap or WattTime. If enabled, users will see the text shown below on the Windows Update settings page. We’re still working on the content that the text links to - stay tuned for future updates. [caption id="attachment_175540" align="alignnone" width="1024"] 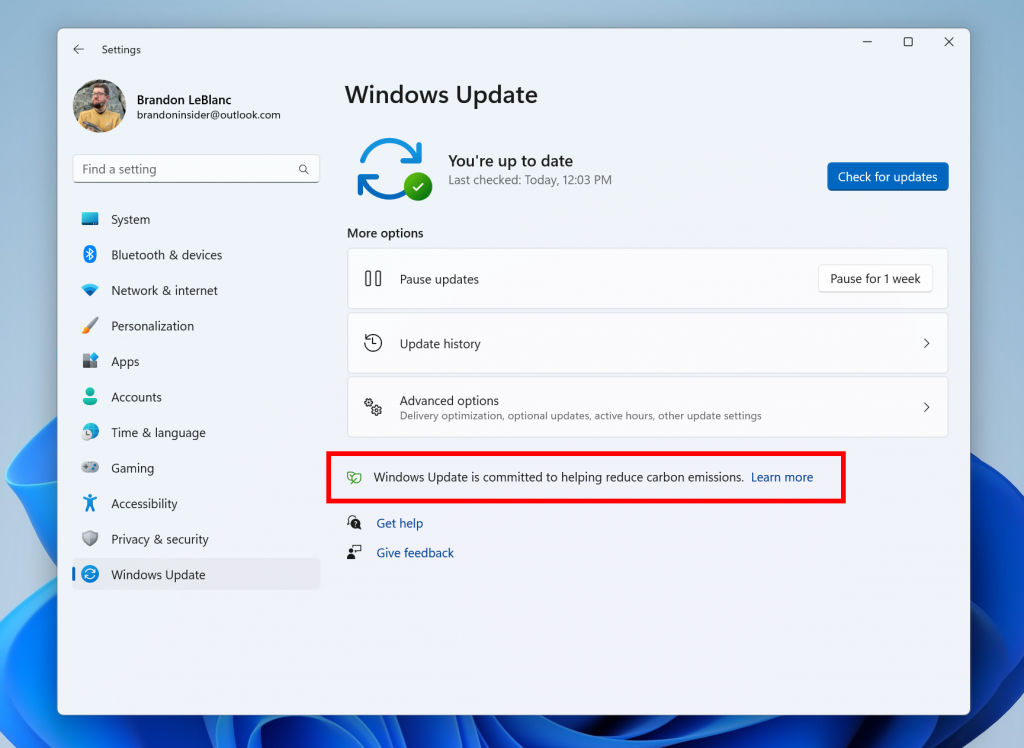 Text as it appears in Windows Update when prioritizing installing updates in the background when more clean energy sources are available.[/caption] [We are beginning to roll this feature out, so it isn’t available to all Insiders just yet as we plan to monitor feedback and see how it lands before pushing it out to everyone.] FEEDBACK: Please file feedback in Feedback Hub (WIN + F) under Install and Update > Downloading, installing, and configuring Windows Update. The Microsoft 365 subscription management experience is now at the top of Accounts page in Settings.[/caption]
[caption id="attachment_175542" align="alignnone" width="1024"] Banner shown on Account settings page alerting you to update your payment for your Microsoft 365 subscription.[/caption] For customers who are not Microsoft 365 subscribers, we are highlighting the free benefits you have access to as part of your Microsoft account on the “Your Microsoft account” page. You can directly access your Office Web Apps, view your OneDrive storage or upgrade to a Microsoft 365 subscription to unlock the premium benefits. [We are beginning to roll this feature out, so it isn’t available to all Insiders just yet as we plan to monitor feedback and see how it lands before pushing it out to everyone.] FEEDBACK: Please file feedback in Feedback Hub (WIN + F) under Settings > Settings Homepage.

You can now link your Android phone to your PC as part of the device setup (OOBE) for Windows 11. Linking will give you instant access to everything on your phone, right from your PC. Without needing to constantly swap your attention to your phone, you can use your favorite mobile apps, send text messages, make calls, and more on your PC with the benefit of a full keyboard and mouse. [caption id="attachment_175543" align="alignnone" width="1024"] The new phone linking page in device setup (OOBE).[/caption] We will be releasing updated ISOs in the coming weeks that will allow Windows Insiders to do a clean-install if they want to or set up a virtual machine to run through the device setup experience. You can use the PC reset feature under Settings > System > Recovery if you want to run through the device setup experience today. FEEDBACK: Please file feedback in Feedback Hub (WIN + F) under Apps > Your Phone.

Smart App Control (SAC) is a new security feature for Windows 11 that blocks untrusted or potentially dangerous applications. SAC can only be enabled on Windows devices that have performed a clean install with the latest Insider Preview build (Build 22567 and higher). SAC is first configured in evaluation mode. While SAC is in evaluation mode, it will learn if it can help protect you without getting in your way too much. If so, it will automatically be turned on. Otherwise, it will automatically be turned off. While in evaluation mode, a user can manually turn on SAC in the Windows Security app under the App & Browser Control section. More details on this feature will be shared in the future. [caption id="attachment_175544" align="alignnone" width="1024"] The “Open with” dialog before and after with the updated design.[/caption] [Start menu]
[Windowing]
[caption id="attachment_175546" align="alignnone" width="900"]

[General]
[Taskbar]
[Tablet-optimized taskbar] NOTE: These fixes will only show if tablet-optimized taskbar is enabled on your device, which is beginning to roll out to Windows Insiders and not yet available for everyone.
[Start menu]
[File Explorer]
[Input]
[Settings]
[Windowing]
[Voice access]
[Live captions]
[Narrator]
[Task Manager]
[Lock screen and logging in]
[Other]
NOTE: Some fixes noted here in Insider Preview builds from the active development branch may make their way into the servicing updates for the released version of Windows 11 that became generally available on October 5th, 2021.


About the Dev Channel [Updated!]​

The Dev Channel receives builds that represent long lead work from our engineers with features and experiences that may never get released as we try out different concepts and get feedback. It is important to remember that the builds we release to the Dev Channel should not be seen as matched to any specific release of Windows and the features included may change over time, be removed, or replaced in Insider builds or may never be released beyond Windows Insiders to general customers. For more information, please read this blog post about how we plan to use the Dev Channel to incubate new ideas, work on long lead items, and control the states of individual features. These aren’t always stable builds, and sometimes you will see issues that block key activities or require workarounds. It is important to make sure you read the known issues listed in our blog posts as we document many of these issues with each flight. Build numbers are higher in the Dev Channel than the Windows 11 preview builds in the Beta and Release Preview Channels. You will not be able to switch from the Dev Channel to the Beta or Release Preview Channels without doing a clean install back to the released version of Windows 11 currently. The desktop watermark you see at the lower right corner of your desktop is normal for these pre-release builds.